All News From Company of Heroes (New Steam Version)

Company of Heroes - Out now for iPad

{STEAM_CLAN_IMAGE}/4649059/018387862e640ec7571f8ac28bf4cafb7e7e8be0.png Our friends at Feral Interactive have faithfully converted our classic game, and it's now available to purchase on the app store!! In the groundbreaking strategy game redesigned and updated for iPad, lead a company of American paratroopers from the D-Day Invasion of Normandy through the battles to liberate France. The game looks gorgeous, with high-resolution graphics optimized for iPad Retina displays. It also plays like a dream, with stable performance, and excellent control schemes cleverly adapted for touch interfaces. Enjoy the title you know and love when out and about, travelling, or just when you're relaxing on the sofa. 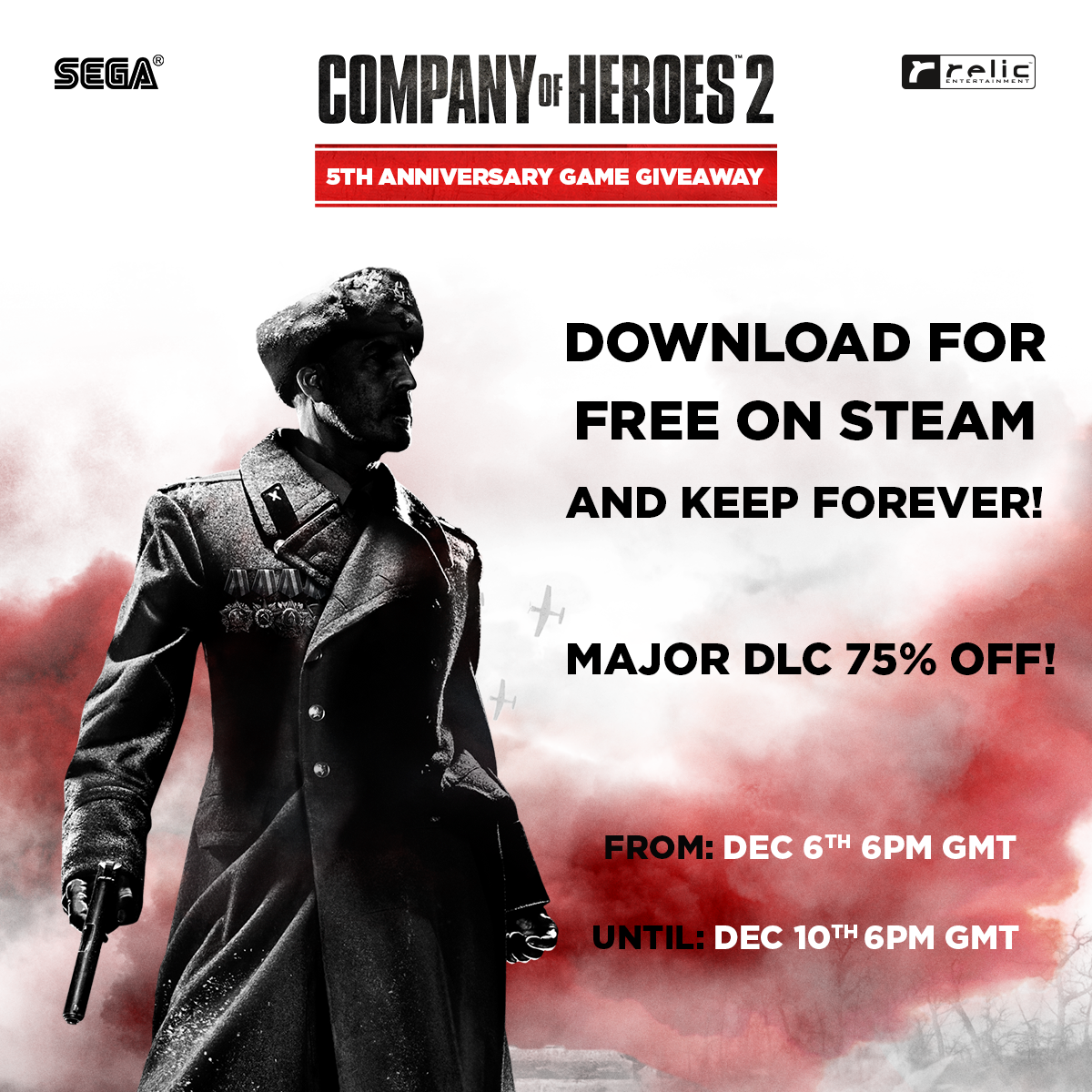 Attention Relic fans! Company of Heroes 2 turned five years old earlier this year! To celebrate, we're looking to end this special year with a fantastic week of activity for the game. Starting from today, and running until December 10th at 6PM GMT/ 10AM PST, players who have not yet joined the ranks of the Company of Heroes 2 faithful will be able to get the game free on STEAM! This isn't just a free weekend; players will be able to add the game to their library permanently if they redeem the game within this window! Already own COH2? Recruit some friends, and put them through basic training. There's strength in numbers! Along with the Game Giveaway, all major COH2 DLC is 75% off for this period! It's a perfect time to pick up that single player campaign or multiplayer army you've had your eye on. Check it out here. This weekend will also see the finals of the biggest 2v2 tournament in COH2 history: The Anniversary Classic. The eight best teams in the world have made it to this final stage, and are going to be battling out for over $20,000 US in prizing! Casting legends A_E and Stormless will be covering the action from a studio in Manchester, and fans can watch the mayhem unfold live on Twitch at twitch.tv/relicentertainment. Keep an eye on the Company of Heroes 2 Twitter account for more details! Finally, in case all of that wasn't enough, COH2 players can look forward to a seriously juicy content update during the week of December 10th with our Commander Revamp Update. Together with our invested players and community balance team, we gave 10 underdog commanders a serious overhaul! Major props to everyone involved! Additionally, as part of this patch, players will also be able to enjoy an updated USF Tech System, and some general quality of life balance changes. Expect new strategies, new abilities, and even a few new units in what's going to be an incredible update for the game. Happy five years and see you on the field, The Company of Heroes team!

COH1 fans! There will be a 3v3 Victory Point Tourney on Saturday March 10th, organized by Duke Jason & Kaos. Get involved or catch the stream! More info here.

It's crazy to think Company of Heroes is more than 11 years old! A big thanks goes out to our dedicated COH community, who keep the game going strong even after all this time. If you're one of those loyal Company of Heroes fans, why not sign up for the 1v1 Anniversary Tournament? The tourney takes place on Sat 21st Oct. It should be loads of fun, and it sure will be interesting to see which vets come out on top come game time! For more info on signup, streaming, the rules, and prizing head here: https://battlefy.com/relic-entertainment/1-vs-1-anniversary-tournament/59d973f65f264f0352bc98ae/info?infoTab=details

Top class community content and modding have played a major part in the longevity of the original Company of Heroes. And we want to help that continue! That's why we have just updated the game with Steam Workshop capabilities and an in-game Workshop hub. This means you can now play, share, and manage your subscriptions to custom scenarios without exiting the game, or manually installing files! What's more, the incredible Eastern Front mod for Company of Heroes is now available on Steam. Get ready to wage war with the original Company of Heroes 2 factions, the Soviet Army and the German Ostheer, in the original game! Additionally, for all you collectors out there, you'll be excited to hear that this update also sees the introduction of Steam Trading Cards.

Starting today, Company of Heroes 2: Ardennes Assault is available for pre-order! This latest entry into our award-winning franchise is by far the deepest single-player campaign that Company of Heroes has ever seen. With a whole new emphasis placed on player agency, your decisions will directly impact the lives of the officers you command, their men, and the outcome of the battle itself. Each of the three selectable companies within Ardennes assault offers different gameplay styles, specializations, abilities, Officers, and has a different impact on the outcome of your game – significantly increasing replay options. What you experience in Ardennes Assault may vary greatly from what other players experience, with your personal journey one that is a direct result of your cumulative in-game choices! For those eager to pre-order this exciting new release, we have a very special incentive! All pre-order purchases will include a fourth company for free. Under the fiery command of Captain Monte Durante, the Fox Company is a group of Rangers with an elite infantry background. Further extending your narrative experience, playing with the Fox Company offers a whole new series of unique company and mission reports that will change your mission experiences. Company of Heroes 2: Ardennes Assault will be released on November 18th and is the latest single-player campaign in the award winning real-time-strategy series.

We will be releasing an update for Company of Heroes today that is aimed at addressing issues that players have been experiencing with the game. We will be bringing the game servers offline for approximately 30 minutes starting at 2 pm PST (10 PM GMT). The following changes are included in the update. We thank you for your patience as we continue to improve your playing experience. Version 2.700.2.30 General - Added: mutliqueue automatch search functionality Bug Fixes - Fixed: Arranged Team Stats are always displaying the 1st (host) User of the Arranged team - Fixed: Leaderboards repeat the same 46 players - Fixed: Users can randomly be the British faction during Panzerkrieg and Assault games - Fixed: Temporarily lagging player causes game to lag for seconds to minutes - Fixed: Changing tabs becomes unresponsive when introducing lag + joining busy chat channels - Fixed: Game List appears to be filtered when Filters are turned off - Fixed: 3v3 and 4v4 matches not being played - Fixed: modding does not work

">   This weekend new troops are being sent to the Eastern Front as Company of Heroes 2 is having its first ever Steam Free Weekend. Starting today and running until Sunday January 19th all Steam members will be able to play Company of Heroes 2 for free. No conditions, no catches, it’s the full Company of Heroes 2 experience and it’s a click away for all Steam members. Players will be able to experience the full single-player campaign, the single player and co-op Theater of War experience in Operation Barbarossa and of course the CoH2 multiplayer. Veterans of CoH2 will not only have new allies and enemies to faceoff with in multiplayer this weekend, but as an additional bonus we are unlocking all of the game’s paid DLC commanders for four days of play. So if there’s been a Commander you’ve wanted to try on the battlefield then this is your chance. As an additional bonus multiplayer automatch games will be awarding ten times the experience all weekend. Yup, that’s right 10x XP all weekend long for any automatch game. Have a friend who you think would love Company of Heroes 2? This is the weekend to get them playing the game. And as an added bonus the game will be 66% off on Steam, allowing everyone who loves playing it for free to keep it for a very low price. Welcome to Company of Heroes 2, we’ll see you on the front lines.

">   In order to keep the original Company of Heroes online we had to move from the servers that the game was launched on, to a new setup on Valve's Steamworks servers. While we were glad that we were able to keep the original game online, the move meant that we lost a number of features that we had managed to build into the game over the years. Since the move we have been working hard alongside the team at Smoking Gun Interactive, a Vancouver based studio featuring many of the original team that worked on CoH, to restore the game's features. Earlier this month we ran an open beta for players to test the latest version of the game. Now thanks to the beta testers' feedback we have launched the latest update to Company of Heroes. Everyone at Relic would like to thank the fantastic fans who have helped us keep Company of Heroes alive. Your passion for the game, and your help with this latest update, have been invaluable to us. We look forward to many more years of seeing you on the field of battle.