AVAILABLE NOW! For those who've made the leap to Age of Empires II: Definitive Edition, the first official expansion, Lords of the West, is now available! Pick up your copy today and expand your gameplay: https://store.steampowered.com/app/1389240/ FEATURES Included in the Lords of the West expansion: New Civ! The Burgundians 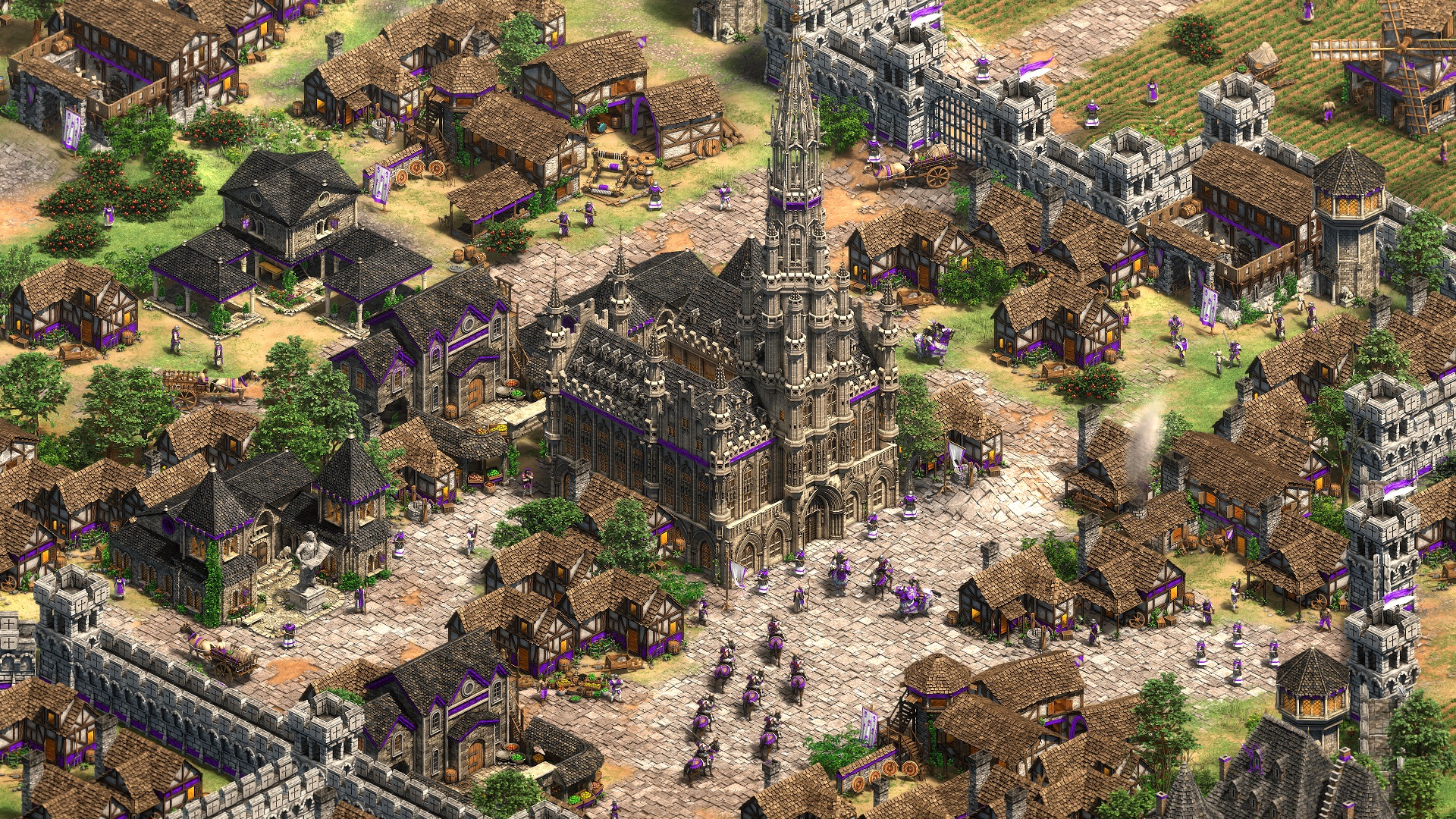 Rise from a mere duchy to the marvel of Western Europe through economic might, cultural achievement, and the use of advanced military technology and tactics. The dukes of Burgundy played a vital role in the politics of medieval Western Europe. They led the transformation from the medieval to the early modern world and ushered in a golden age for the region called the Northern Renaissance. At their height, these “Grand Dukes of the West” controlled large parts of modern-day France, Belgium, The Netherlands, and Luxembourg. Carving a new polity out of French, English, and Holy Roman domains was a daunting task that came with a high price: decades of war and bloodshed. However, the Burgundians knew to use more than just warfare to get what they wanted. Their diplomatic and marriage policies proved to be even stronger than their swords. ▶︎ CIVILIZATION BONUSES Economic upgrades are available one Age earlier than other civs Stable technologies are 50% cheaper Gunpowder units gain a +25% bonus to their attack Cavalier upgrade is available in the Castle Age ▶︎ TEAM BONUS Relics generate both Gold and Food ▶︎ UNIQUE UNITS Coustillier: Burgundian cavalry unit that utilizes a powerful shock attack when charging into battle. Strong vs. infantry and archers. Weak vs. Camel Riders and Monks. Flemish Militia: Burgundian unique infantry unit. Strong vs. cavalry. Weak vs. archers. ▶︎ UNIQUE TECHNOLOGIES Burgundian Vineyards: Convert all food into gold at a 2:1 ratio; Farmers slowly generate gold in addition to food. Flemish Revolution: Upgrades all existing Villagers into Flemish Militia, and allows the training of Flemish Militia at Town Centers. ▶︎ FULL TECHNOLOGY TREE

Experience the diverse cultures and martial spirit of the Mediterranean’s crossroads as you build one of the most coveted kingdoms of medieval Europe. Robert Guiscard arrived in Italy in 1047 CE with a robber-band of 35 men. Within a century, his Hauteville family included dukes in Italy, princes in the Middle East, and even the King of Sicily. Join this intrepid family of Norman adventurers and complete their unlikely and compelling story, starting with Robert Guiscard’s arrival in Italy to his nephew Roger II’s consolidation of the Hauteville lands into the Kingdom of Sicily. The Italo-Normans, as the conquerors and rulers in Norman Italy and Sicily are now known, were successful on the battlefield because of their fierce disposition, vigorous military tradition, keen affinity for tactics and the use of cunning, and sheer torrid speed. In these, they most closely resembled their Viking and Frankish forebears, but as they settled in Italy and Sicily they embraced local cultural customs and norms of governance. ▶︎ CIVILIZATION BONUSES Castles and Town Centers are constructed 100% faster Land military units absorb 50% of all incoming bonus damage Farm upgrades provide +100% additional food to Farms before they need to be reseeded ▶︎ TEAM BONUS Transport ships +5 carry capacity and +10 armor versus anti-ship bonus damage ▶︎ UNIQUE UNIT Serjeant: A hardy infantry unit which can also construct Donjons. ▶︎ UNIQUE BUILDING Donjon: Unique fortification used to train Serjeants. Units can garrison in the building for protection; Archers and Villagers shoot additional projectiles when garrisoned. ▶︎ UNIQUE TECHNOLOGIES First Crusade: Upon researching, each Town Center (up to 5) spawns a one-time group of 10 Serjeants. Scutage: Upon researching, each team member receives a one-time payment of 15 gold for each military unit that they own. ▶︎ FULL TECHNOLOGY TREE

New Campaigns ▶︎ EDWARD LONGSHANKS {STEAM_CLAN_IMAGE}/35210618/779f7e321e6821398a212127ac2a573795f5b422.png Edward I is widely considered as one of England’s greatest rulers, mentioned in the same breath as Alfred the Great and Elizabeth I. Known as “Longshanks” for his height and intimidating stature, he was a man that commanded respect as he transformed England from a tattered state into a prominent European power. ▶︎ THE GRAND DUKES OF THE WEST {STEAM_CLAN_IMAGE}/35210618/788b3f84e1a6d83ae3ceb65c308bdce995cd2937.png he Burgundian dukes are driven by ambition and greed. They lead an extremely luxurious life and need to constantly expand their domains in order to pay for it. Image and publicity mean everything to them. Philip the Bold earned his nickname after the defeat at Poitiers and John the Fearless earned his after a defeat in the Crusades, so these dukes know the importance of propaganda. ▶︎ THE HAUTEVILLES {STEAM_CLAN_IMAGE}/35210618/03c461b265f17bbb64c2b7917c5885f4f35d5c55.png Robert Guiscard arrived in Italy in 1047 CE with a robber-band of 35 men. Within a century, his Hauteville family included dukes in Italy, princes in the Middle East, and even the King of Sicily. Join this intrepid family of Norman adventurers and complete their unlikely and compelling story. New Achievements Unlock and earn brand-new achievements on Steam and the Microsoft Store! ACHIEVEMENT NAME ACHIEVEMENT DESCRIPTION The English Justinian Complete the Edward Longshanks campaign. The Good, the Bold, and the Fearless Complete the Grand Dukes of the West campaign. Haute Culture Complete the Hautevilles campaign. Unchivalrous Pragmatist Defeat Simon the Younger's army before the baronial forces attack in the first Edward Longshanks mission "Vain Ambition". Throne Thief Steal the Stone of Scone in the fourth Edward Longshanks mission "Toom Tabard". Malleus Scotorum Kill William Wallace before Robert the Bruce betrays you in the fifth Edward Longshanks mission "Hammer of the Scots". No Wheels Do not construct a single siege weapon in the first Grand Dukes of the West mission "A Kingdom Divided". A Second Hastings Ignore the armistice offered by the British and invade England by wiping out Humphrey's base in the fifth Grand Dukes of the West mission "The Hook and Cod Wars". Shut Up La Hire! Defeat the French army before capturing Joan of Arc in the sixth Grand Dukes of the West mission "The Maid Falls". Self-Made Man Win without allying with either Argyrus or Guaimar in the first Hautevilles mission "Guiscard Arrives". Haute, Haute, brief candle! Inspire a rebellion in the second Hautevilles mission "Roger in Sicily". Italy Jones and the First Crusade Do not lose a hero in the fourth Hautevilles mission "Bohemond in the East". Burgundian Victory Win a game playing as the Burgundians. Sicilian Victory Win a game playing as the Sicilians. Golden Spurs Transform at least 50 Villagers into Flemish Militia by researching Flemish Revolution. Tour d'Italie Construct a Donjon and use it to train a Serjeant. PICK UP LORDS OF THE WEST TODAY There’s no better time to expand your Age of Empires II experience! With free updates every month, new features and content, exclusive game modes and challenges, amazing community tournaments, and other surprises coming to the strategy classic, there’s always something to look forward to as you play and master all it has to offer! Pick up your copy of Age of Empires II: Definitive Edtion and Lords of the West today, and then come join the discussion on our official social channels: Age on Twitter Age on Facebook Age on Discord Age Forums Age on Instagram NEED HELP? Visit our support page for some of the most common issues and troubleshooting tips to help you get started in the game: Age of Empires II Support We'll see you on the battlefield! ⚔